The town of “Medinat Fas” was founded by Idriss the First in 789, in the current location of the Andalous district. In 809, Idriss the Second founded “al-Aliya” on the other bank of Wadi Fez. Al Aliya swiftly grew and became a true city with a mosque, palace and kisariya (market).

Even before the town of Fez was founded, the springs of drinking water thereabouts were known and praised in songs. They were undoubtedly an important factor in the choice of location for the future metropolis.

The following developments were due to two successive waves of immigration. In 817-818, nearly 800 Andalusian families who had been evicted by the Omeyyades from the Spanish town of Cordoba, settled in the town founded by Idriss the First. A short time afterwards, around 2000 families banished from Kairouan, settled on the other bank. 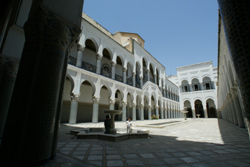 The university mosque “al-Qarawiyine” founded in the Ninth Century became one of the most important spiritual and cultural centres of the era. Its influence spread to the schools of Islamic Spain and further into Europe. It is renowned for being the oldest university in the world.

The El Mokri Palace is located on the Southern border, intra-muros, of the old Medina atop a hill – the hill of springs (El Ayoun), on the edge of the small valley of Wadi Fez and above the south gate, Bab Did. 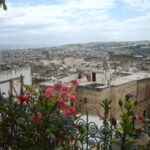 Not only did the newcomers bring with them technical and traditional expertise, but also a long experience of city life. Under their influence, Fez became a significant cultural centre and, after the founding of the Karaouiyne University Mosque, the religious heart of the Maghreb.

Fez’s location is especially advantageous at the crossroads of important trade routes in the heart of a region naturally rich in the precious raw materials required for arts and crafts (stone, wood, clay). This enabled the city to develop very rapidly.

Notably, the city is on the caravan road which stretched from the Mediterranean to Black Africa. It passed through the large trading city which disappeared in the Seventeenth Century, Sidjilmassa, and on into the Tafilalt region which nowadays corresponds with the Rissani / Erfoud region. 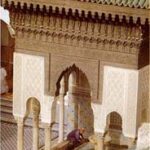 The two parts of the city were united in the Middle Ages and the wall which had separated them was dismantled. Fez lost its role as capital when the Almoravids founded Marrakesh in the Eleventh Century, but regained this status in 1250 thanks to the Merinid dynasty. During their reign, the new town of El Medinet El-Beida (the white town)was founded in 1276, equipped with ramparts, a palace and gardens.

It quickly became known under the name of Fez el Djedid (new Fez) as opposed to Fez el Bali (the old town). The Jewish population who lived in the vicinity of the palace was forced to leave and the mellah (Jewish quarter) was created in the former garrison district of the Syrian archers.

At the beginning of the Fourteenth Century (the height of Hispano-Moorish art), the city experienced strong growth. At that time, Fez Universitywas known throughout the world. Thanks to the caravans travelling to Badis Port in the Rif, Fez was constantly in touch with Islamic Spain and Europe. In 1471, the city fell into the hands of the Beni Wattas dynasty. 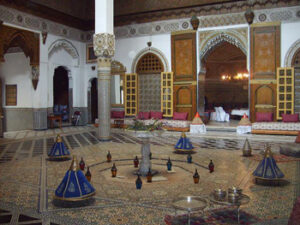 In 1522, Fez suffered an earthquake which partially destroyed the town. In the years which followed, many buildings were rebuilt, restored or replaced with new ones. The Saadian dynasty took the city in 1554, but chose Marrakesh as capital.

At the end of the Seventeenth Century, with the beginnings of the Alaouite dynasty, Moulay Ismail chose Meknes as the new capital. He settled a part of the Udaia clan who had helped him to win power, in Fez. After his death (1727), the Udaia revolted. They were only driven away from the city in 1833 by Abd er Rahman.

Moulay Abdallah, the successor to Moulay Ismail, made Fez his place of residence and had mosques, schools (madrasas), bridges and roads both renovated and newly built. The roads in Fez el Djedid are cobbled. 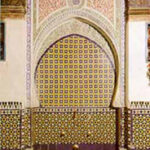 In the Nineteenth Century, the two old parts of town were joined by new buildings, such as the Boujloud Palace. Until the beginning of the protectorate in 1912, Fez was the capital of Morocco.

It was in Fez that the French and Spanish protectorate treaty (for the North of the country as well as Western Sahara) was signed on the 30th of May, 1912. Less than three weeks after it was signed, riots broke out in the city.

Rabat was officially declared capital of Morocco but Fez remains an important place of royal residence and a centre for culture, arts and crafts, trade and politics. The Istiqlal (Independence Party) was founded in Fez by Allal El-Fassi.

There were many attempts to try to expel the French from Fez. In 1944, the manifesto for independence was drawn up in a house in the old Medina, now place de l’Istiglal. The city was the scene of many riots in the 1980s and the beginning of the 1990s.

Under the leadership of Lyautey and according to the plans by architect Henri Prost, a new town was developed in the vicinity of Dar Debibagh to the south of Fez el Djedid. 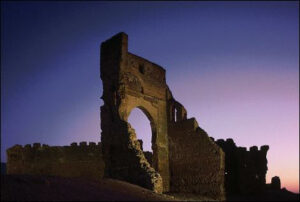 Although it was a residential quarter for Europeans at first, the “new town” continued to grow as a modern Arab agglomeration with new villa districts.
Authorities, institutions and service companies established themselves there.

Fez has long been the cultural and spiritual capital of Morocco, with one of the top universities in the world (Quaraouine University).
Today the medina is the main centre of attraction

Contemporary culture centres are sadly lacking. However, some are now beginning to appear, along with galleries: The Agdal Municipal Culture Centre (near Place Florence) has an auditorium and an exhibition gallery.